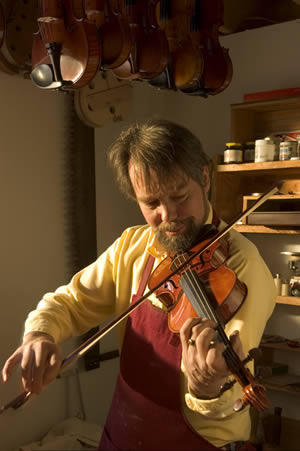 He has authored two articles on acoustics for the Catgut Acoustical Journal and the Violin Society Journal. Having won multiple tone awards, David was invited to present his acoustical ideas to professional violin makers at the Violin Society of America’s Oberlin Summer Workshops in 2006. David exhibited a highly innovative viola at the Innovation Exhibit at the VSA International Competition in 2006. Orchestras in which David’s instruments are played include the Atlanta Symphony, the Cleveland Symphony, the Nashville Symphony and the Nashville Chamber Orchestra, the Richmond Symphony, Washington Opera Orchestra, and others.

David’s violins are heard on recordings of the Indigo Girls, the Fletcher Bright String Band, the Nashville Chamber Orchestra, and hundreds of others. The CD “Celtic Fantasy” (Green Hill 2000), played on NPR, features three different violins of David’s and mentions the maker in the credits. Professional memberships include: American Viola Society, Violin Society of America, Balalaika and Domra Association of America, Catgut Acoustical Society, Guild of American Luthiers, String Industry Council, and others.

David’s instruments are featured on recordings of classical, popular and folk music and are noted for their beautiful workmanship as well as their exceptional clarity and balance of sound both onstage and in the recording studio. He has entered instruments in three international competitions and won awards for tone at all three (1982, 2000, 2002) including the silver medal for tone in the 2002 VSA international competition. David has exhibited instruments at various viola congresses and violin conferences as well as at the special “Celebration of American Excellence” exhibitions in New York City (1997, 1998).